Every year, visitors from all over the world come to the Giardini and the Arsenale for the Biennale, the international exhibition of contemporary art and architecture which has taken place in Venice since 1895.

But, what is the Arsenale?

Dar al-sina, the house of the art

Like several other Italian words, arsenale has its origins in the Arabic language. Dar al-sina meant “the house of the art, the house of manufacture”: in other words, a factory. The Arsenale was, in fact, the public shipyard where Venetians used to build their warships. Behind its walls, the construction of the fleet took place in a very efficient and organized factory controlled by the State.

Probably established as early as the 12th century, the structure originally comprised only the pool behind the two towers next to the main gate in Campo de l’Arsenal. 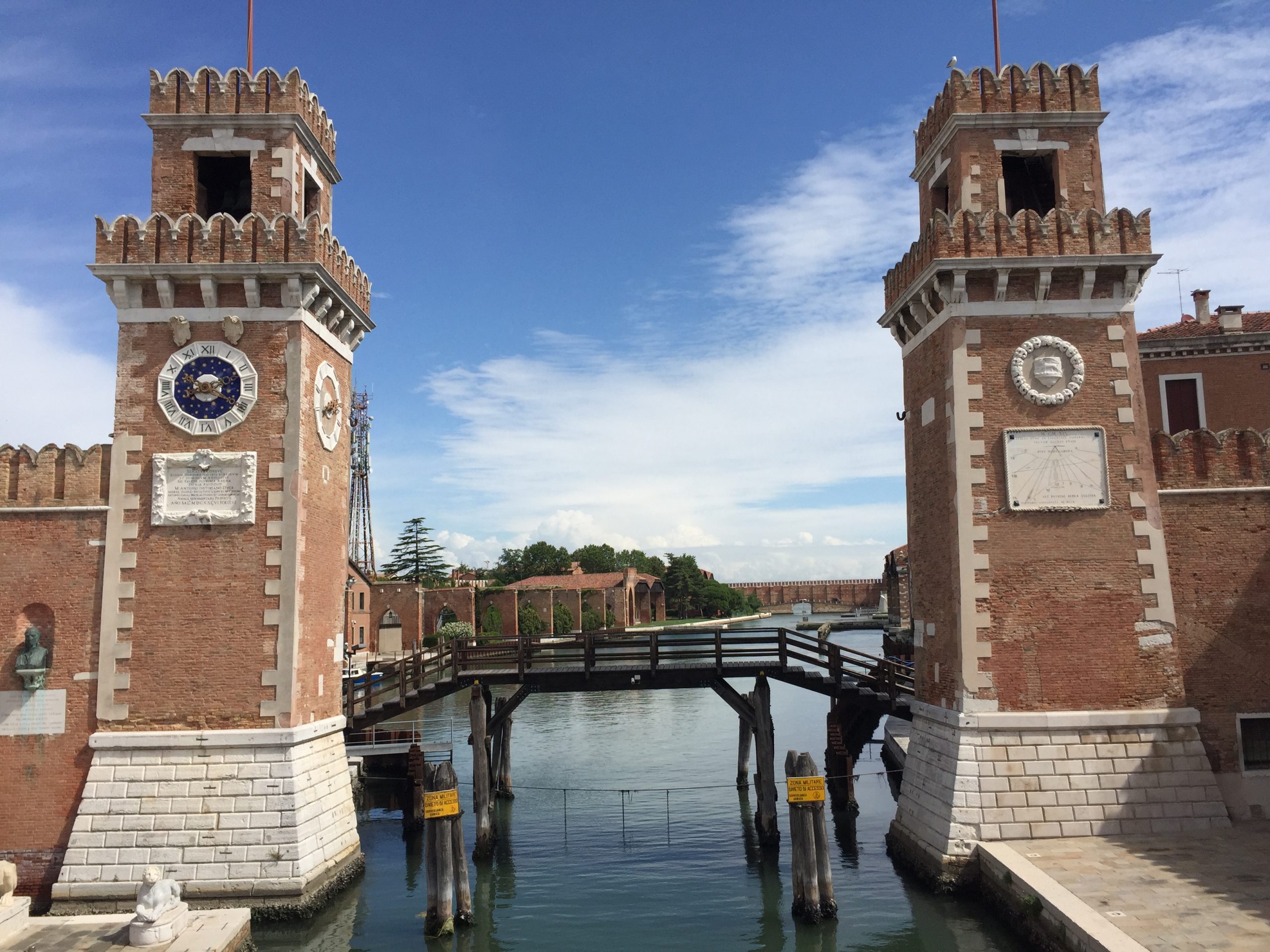 Over the course of the centuries, the shipyard expanded to cover a large area in the north-eastern section of city. Different buildings were erected for the many different needs of the fleet: the corderie for the production of ropes, the artiglierie and sale d’armi for the manufacture and storage of weapons, and the gaggiandre as special shelters for galleys.

Illustrious visitors to the Arsenale

The Arsenale had to protect the secrets of the Venetian fleet, which is why it is entirely surrounded by a tall wall with merlons, almost like a fortress inside the city.

Such was the fear of spies that in the 16th century the Venetian government ordered the windows of the bell tower of the Church of San Francesco della Vigna walled up because they were too close to the shipyard.

Yet, the Arsenale was also one of the greatest prides of the Serenissima and special guests were escorted inside its spaces to show off the shipbuilding skills of the Venetians.

For example, in 1314 the poet Dante Alighieri was in Venice as an ambassador from the city of Ravenna, and it is likely that he visited the Arsenale. A description of the activity in the shipyard appears in the 21st canto of the Inferno, where the pitch used in the factory is compared to the dark boiling fire in Hell:

“As in the arsenal of the Venetians,
all winter long a stew of sticky pitch
boils up to patch their sick and tattered ships

that cannot sail (instead of voyaging,
some build new keels, some tow and tar the ribs
of hulls worn out by too much journeying;

some hammer at the prow, some at the stern,
and some make oars, and some braid ropes and cords;
one mends the jib, another, the mainsail);”

Another famous “tourist” was Henry III, King of France, who visited Venice in 1574. As part of the tour of the most noteworthy places in the city, the king was taken inside the Arsenale and showed how Venetians were able to build an entire galley in a single day!

Historians doubt that this was actually possible, it was probably staged as a way to show off for the king. Still, it was not a bad way to get a foreign ruler to take Venice seriously.

After the fall of the Venetian Republic in 1797, French and Austrian rulers updated the ancient Arsenale for new naval technologies.

One of the most evident changes was the opening of the Porta Nuova, the new gate facing San Piero di Castello. Next to it the Torre di Porta Nuova was built, a huge structure designed to contain machinery to mast ships, though the machinery was never completed.

More innovations were carried out by the Italian State after 1866, allowing the construction of iron ships and submarines in the Arsenale of Venice. Modern vessels and weapons were far heavier than the old ones, thus, modern cranes became necessary. These were imported from England and are still visible along the main pool: a Fairbairn steam crane which was installed in 1874 and a hydraulic crane built by Armstrong Mitchell in 1885. The latter is the only remaining example of its type in the world and, at the time, it was one of the most advanced and innovative cranes anywhere. Custom made in England, it was then delivered to Venice and assembled on site on top of the masonry base that we can still see today.

A unique showcase for contemporary art

Although part of the huge structure is still used as a military base by the Italian Navy, most of the Arsenale was gradually abandoned after the First World War. Its ancient spaces were simply no longer useful for the new necessities of the navy.

A completely new chapter in the history of the site started in 1980, with the first edition of the Architecture Biennale. On that occasion, curator Paolo Portoghesi used the Arsenale as a venue for the Strada Novissima(The Newest Street): 20 facades of houses, designed by 20 different architects, showcased along 70 of the 317 metres of the Corderie. The following year, the site was used again, this time for the Art Biennale to showcase the works of young artists.

Following necessary restoration work, several spaces in the Arsenale are now used regularly for the Biennale, and together with the Giardini, the site has become one of the exhibition’s main venues.

The Corderie hosts one section of the thematic exhibition, featuring different international artists or architects.

National pavilions are to be found in the Sale d’Armi and Artiglierie, as well as in the Tese, which used to be a warehouse for wood.

A big section of the Tese is occupied by the Italian Pavilion, for which a new entrance gate was designed by architect Cino Zucchi in 2014.

In front of the pavilion, the Gaggiandre are often used to host impressive installations suspended over the water.

Another outdoor space which often hosts site specific projects is the Giardino delle Vergini (Garden of the Virgins), the former site of a convent that became part of the Arsenale in the 19th century. This garden is now the very last section of the exhibition, leading to the Ponte dei Pensieri (Bridge of Thoughts), created in 2009 as a new gate out of the Biennale.

Finally, the Arsenale also hosts two theatres for the annual festivals of Dance, Theatre and Music.

The spaces of the Arsenale are accessible while the Biennale is happening (normally from May to the end of November), or in the rest of the year upon request. Visiting this ancient site is a fascinating way to discover the secrets of the military power of the Venetian Republic, a bit of the recent history of the city, and a collection of world-famous contemporary art exhibitions.