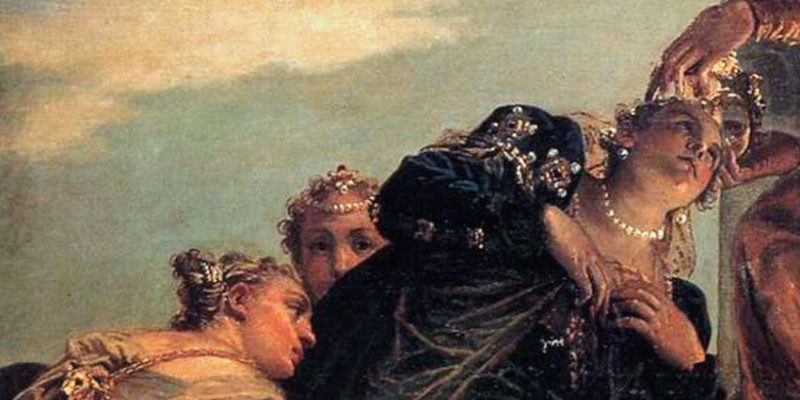 On March 29th, 2016 the Jewish Ghetto of Venice commemorates the 500th anniversary of its foundation.

In the small area of the city where the Jews were forced to live starting in 1516, we can still see the synagogues and the traces of the long history of this community, but we rarely hear the names of those who populated the Ghetto. Paradoxically, the most famous Jew of Venice – Shylock – is just a fictional character.

What about the real people?

Remembering that March is Women’s History Month, we picked out four examples of Jewish women who lived in Venice centuries ago. Here are their stories.

The name of this 70-year-old lady appears in the documents of the Inquisition describing her trial in 1555. She belonged to a family of Jews who converted to Christianity, but was accused of having secretly kept her original faith. False conversions were not uncommon, as proved by an inscription in the Ghetto Vecchio, forbidding those who had become Christians to enter the Ghetto.
Several witnesses accused Elena of swearing inside a church, denying the virginity of Mary, eating meat on Friday (which is not allowed in Catholicism) and slaughtering hens in the kosher way.
Arguing for her defense was her son Giovan Battista, a physician, and the first member of her family to convert. His words reveal much about the way women were considered back then: “Being a woman and weak in her mind, she cannot speak about religion, as she would say many a silly thing”. Old Elena was thus not charged with heresy, but to prevent other scandals she was forced to spend the last years of her life in a hospital.

This marrano lady is probably one of the most famous Jewish women of the Renaissance period.
Marranos were Spanish and Portuguese Jews forcibly converted to Christianity. Among them was the family of Gracia Nasi, whose Christian name was Beatrice de Luna. She married another crypto-Jew, the super-rich spice merchant Francisco Mendes.
After the death of her husband, Gracia became the manager of a huge fortune, and her adventurous life throughout Europe seems like a movie plot.
She arrived in Venice in 1544: a special safe-conduct granted by the powerful Council of the Ten allowed Gracia and her family to live in the city. As she was officially a Christian her residence was not in the Ghetto, but in a palazzo on the Grand Canal. The government of the Serenissima always welcomed rich merchants to its territories and it was prone to turning a blind eye to their religion.
Quarrels with her sister, Brianda, over their patrimony, and increasing doubts regarding her real beliefs made Beatrice de Luna decide to leave Venice and move to Constantinople. There she was finally able to practice her original faith in public. Gracia and her nephew Joseph Nasi had a strong influence on the Ottoman sultan Suleyman the Magnificent, who gave them authority over the Tiberias Region, where they financed a project of settlements to host Jewish refugees.

We only know the first name of this gifted singer who entertained Venetian nobility at the beginning of the XVII century. Rachel was so popular that, together with her father Jacob and brother Marco, she was granted a special permission to leave the Ghetto at night in order to perform in the houses of nobles and other “honorable persons”. A scandal occurred in 1609 when she was accused of having visited the homes of lower class people and behaving dishonestly. The ruling magistracy of the Cattaveri therefore restricted her permit, but never completely forbade her to go out after sunset.
Such was her popularity, and audacity, that she kept disregarding the rules: later records accuse her of going around at night singing on a gondola, surely without any permit.

Born into a wealthy family in 1592, Sara received a humanistic education and became an appreciated poet and musician by the age of 15. Though married to a Jewish businessman from the Ghetto of Venice, her most famous relationship is her correspondence with the Genoese Christian Ansaldo Cebà, who was 30 years older than her.
Don’t think of anything immoral, it was just spiritual love! The two never even met and Cebà’s real aim was to convert the young and beautiful Sara to his faith, which never happened.
In the Ghetto, the poetess created a literary salon frequented by several distinguished personalities, such as the famous rabbi and scholar Leon Modena.
Apparently not all the members of this group were loyal and friendly towards Sara. Baldassarre Bonifacio, a poet and a priest, publicly accused her of not believing in the immortality of the soul: this was a heresy for both Christians and Jews. In order to defend herself Sara wrote the Manifesto, which became her most famous work.
Other scoundrels, such as her former teacher Paluzzi, took advantage of her naivety by stealing her money.

The stories of Elena, Gracia, Rachel and Sara help us go beyond the stereotypes and get closer to the real life of the Jewish community in Venice, inside and outside of the Ghetto.
We thus conclude this article with a beautiful line from one of Sara Sullam’s sonnets, To the Human Spirit:

You depart, there where Heaven bends towards you