Did you know that Venice has one of the most important museums of Asian art in Italy?

Did you know that one of the Austrian painter Gustav Klimt’s masterpieces is in Venice?

The Museum of Oriental Art and the painting “Judith II” by Klimt are located in the same venue, the baroque palace Ca’ Pesaro.

The influence of Oriental art on Klimt is often the theme of special exhibitions around the world; so let’s take a closer look at “Judith II” and compare it with the pieces in the collection of the Museum of Oriental Art of Venice. 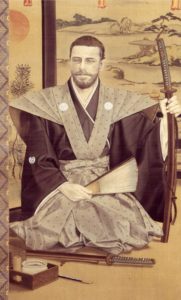 The collection of the Museum of Asian Art in Venice is almost entirely made up of Japanese pieces collected by Prince Henry of Bourbon, Count of Bardi (shown in the picture in Japanese clothing), during his journey around the world that took place between 1887 and 1889.

Gustav Klimt never visited Japan, but he did have a keen interest in Japanese art that began with the runaway success of the Japanese delegation at the Vienna World’s Fair in 1873, if not before. We know that he was a collector of Japanese artifacts and artworks, and that an interest in everything Japanese was common among most of the artists of the Vienna Secession.

Klimt also owned some Japanese kimonos, and both he and his partner Emilie Flöge designed and used robes inspired by Asian dresses.

What about the long vest worn by Judith? We can see on it the same mix of swirls, flowers and geometric patterns that adorn some of the kimonos in the collection of the Museum of Oriental Art in Venice.

One of the first things we notice while standing in front of “Judith II” is the long and narrow format of the painting, quite unusual in Western art. Even stranger is the golden wooden frame: the side panels are almost as wide as the painting itself.

When we move to the collection of Japanese Art on the top floor of Ca’ Pesaro, we find a lot of kakejiku: painted scrolls in vertical format meant to be displayed on a wall, usually mounted on a piece of decorated fabric or paper.
Aren’t they quite similar in shape to “Judith II”?

The other distinguishing feature of the frame is the golden color, which also appears in “Judith II” and in many other works by Klimt. Well, the Japanese too were fond of the color gold, and we can clearly see this in the huge collection of lacquerwares in the Museum of Oriental Art.
Aren’t gold and black the same dominant colors as in “Judith II”? 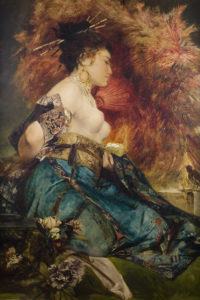 An artist who had a strong influence on Klimt’s early career is Hans Makart, whose orientalist taste clearly shows in his painting of a Japanese girl, which share some similarities with Klimt’s Judith: the profile view, the bare breast and shoulders, the abundant jewelry.

Although inspiration for Makart’s figure is drawn not only from Japanese imagery but also from other lands such as China or the Middle East, we could easily argue that Japanese female figures were present in Klimt’s imagination when he created Judith. 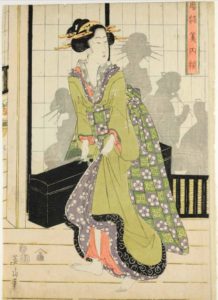 In the collection of the Museum of Oriental Art there are many ukiyoe prints depicting traditional Japanese beauties: their sinuous bodies, the elegant movements of their hands, and the loose kimonos showing bare shoulders all remind us of Klimt’s image. 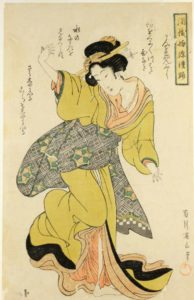 It is worth noting that for a long time “Judith II” has also been identified with another biblical character, the dancing princess Salomé: the curving lines of her robe remind us of the dancing beauties portrayed in the collection of the Oriental Art Museum.

“Judith II” has been in the collection of the Venetian Museum of Modern Art since 1910, when it was purchased at that year’s Biennale where Klimt had a solo show. The show definitely had a strong impact on several Venetian artists of the time, above all on Vittorio Zecchin: a review of his exhibition in 1919 described his style as “derived from Klimt and the Japanese”.

In the collection of Ca’ Pesaro we can find some panels of “One Thousand and One Nights”, a set of large panels made by Zecchin in 1914: here again we can admire the use of gold, the elegant geometric motifs, and the kimono-like robes.

Without leaving the beautiful and unique Ca’ Pesaro we went on a journey to Japan, then to Vienna and finally back to Venice!